Having enjoyed two of Janet Simkin’s training days previously, I was very happy when she agreed to run one for the group. Places filled up rapidly, and it was very well attended. It was one of her day courses that first got me hooked on these fascinating organisms, previously they were just interesting things to photograph, especially in macro. Then Janet came, and I had a light bulb moment. These things had names, who knew! So I started on a journey to learn some of the ones I kept coming across, and very quickly became addicted.

We spent the morning indoors, as Janet explained a little about them, and familiarised us with some of the commoner ones that we might expect to see around the reserve at Rainton Meadows. Time was spent examining samples, questions were asked, and labels (correctly) placed in boxes.

She also informed us about a survey which we can participate in, recording the more common lichens on individual trees (not in a wood or forest) to see how they are spreading, or declining, as the case may be. Here is the link:  https://arcg.is/0z5H8j . I have been participating in this survey for a while, it is fairly simple and quick to do, you just note down all the lichens listed, and whether they are abundant, frequent or occasional. The type of tree helps too. There is also a box to note any additional ones that you might recognise.

After lunch we headed out into the reserve, it was decided Joe’s Pond would be a good area to search, but as always happens, quite some time was spent in the car park! Xanthoria parietina was found here, along with several others on the trees. We then found a nice crustose one on a stone wall, Porpidia crustulata, as you can see from the photo, the concentric circles formed by the apothecia (fruiting bodies) is typical of this species.

As we headed into the woodland, a nice foliose lichen was noticed on a tree, which turned out to be Physconia grisea, which was a new one for me, and as far as I’m aware, a new record for the site. The strange Ramalina fastigiata was also found, another tree dweller, which carries it’s apothecia on the ends of the lobes, like a trumpet. We had hoped to also find some Cladonia, and I managed to find a tiny one on a fence post at the edge of Joe’s Pond, Cladonia corniocraea, just millimeters tall. An eyeglass was necessary to discern whether or not it even had apothecia (it had, see photo). Another Cladonia turned up on a fence rail further along, C. chlorophaea this time, with lovely “pixie cups”.

I must mention Physcia aipolia with its beautiful apothecia, on the top rail alongside the pond, this is one of my favourites. Also the Punctelia , which Janet tested with bleach to determine which species it was, as you can see from the photo it turned pinky/red meaning it was P. subrudecta.

There isn’t room here to describe them all, but Janet recorded 28 species on Sunday, 9 of which were new to the site, and the full list now stands at 53, although there will still be others to be found. Many thanks to all the members who came and made it such an enjoyable day, and to Janet for imparting her knowledge in such an interesting, and easy to understand way. 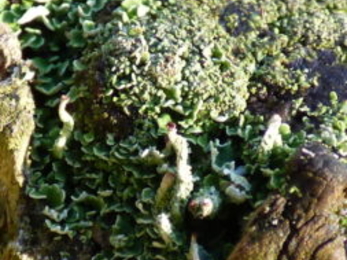 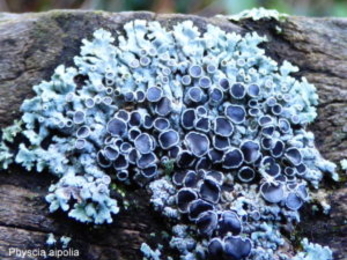 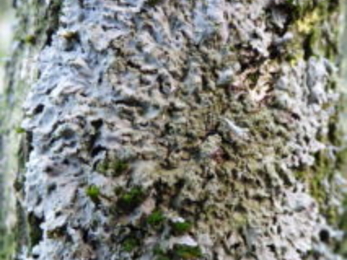 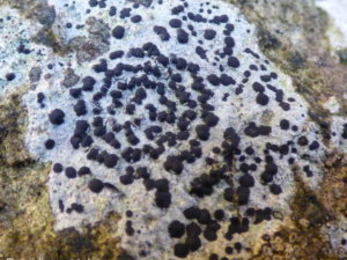 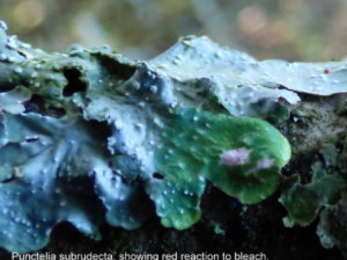 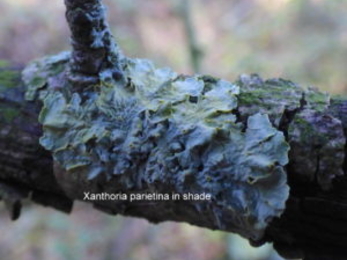 There was a great turn out for the Fungi training day at Black Plantation, as volunteers from Rainton Meadows and Low Barns attended the…