The aims of the project were to establish verified records of reptiles across the vice county 66 region.

The production of this atlas is the result of work carried out by a dedicated project officer and a team of trained volunteers who gave their time to survey across the region over the two seasons that the project ran for.

It is hoped this atlas and the resulting knowledge of our regions herpetofauna distribution can help towards better land management practices being adopted throughout the area.

Social media and events held through the region have helped to promote knowledge and awareness of our reptiles in order for the general public to better cope with the presence of reptiles as through knowledge comes respect.

A small robust short legged lizard about 16 cm in length with the tail being 1 to 1.5 times the length of the body. 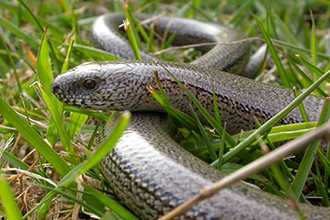 A legless lizard with a stout body short neck and rounded head. 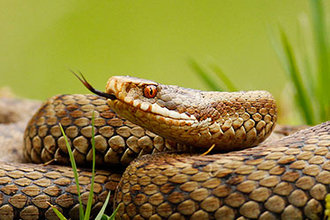 A stout bodied snake up to 65 cm with a thin neck triangular head and short quickly tapering tail. 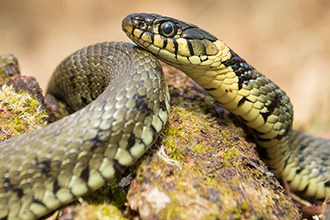 With the lizards and adder being the most likely reptiles to be found in the North East their distribution has been well documented both historically and during the term of the Revealing Reptiles Project.

Between the uplands of the dales and the coastal strip lies a large area of lowland farm and urban sprawl. Both these have contributed to compacting reptile distribution. Small pockets of habitat which become unconnected to others simply can not accommodate reptiles in significant numbers, in order to retain population health. Hence they become isolated which leads to inbreeding and eventual collapse of the population.

The fear for grass snakes is that continued loss of nest sites will lead to their eventual extinction from the region.

As the only egg layer among our widespread UK reptile species, the grass snake requires nesting sites, such as compost or farm yard waste heaps, to be created and above all maintained year after year. These reptiles are very loyal to nest sites and females return throughout their lives to lay eggs.

FUTURE OF REPTILES IN THE REGION

The only hope for reptiles in the region and across the UK is sympathetic habitat management in the areas where they occur. If possible an improvement in habitat creation which can increase connectivity between known locations to help increase genetic diversity.

Awareness of reptiles among the public and a less aggressive stance towards the adder in particular from media and the general public may perhaps help with reversing a decline in some areas of these fascinating animals.

Joint projects among land owners to increase habitat features for grass snakes may also help to encourage what few animals remain to increase in number once again.

Perhaps a designated study into the possibility of a reintroduction scheme will prove successful and allow this stunning creature to regain a foothold in our region.

Project officer John Robson Grundy would like to thank the following for their help in getting this project together and keeping it going.

VOLUNTEERS FOR ALL YOUR REPTILE RECORDS