A round-up of the Durham Wildlife Trust orchids

Recently the Trust was contacted by Don, a Durham Wildlife Trust member and regular visitor to the Trust’s Hawthorn Dene Nature Reserve. Every visit to Hawthorn Dene brings a new discovery and this spring has been no exception. During my early May visit I was met with an amazing display of Early Purple orchid (Orchis mascula) along the woodland nature trail. It struck me that I had never seen quite so many. Nature rewarding me, perhaps, on my first outing since lockdown restrictions eased.

Coincidentally it was the next day that Don called the Trust with a query regarding Hawthorn Dene’s amazing meadow. A fellow devotee of Hawthorn Dene, Don has spent years visiting the woodland and the meadow. In particular he has taken a great deal of enjoyment from the displays of orchids in the meadow. He wondered though, why from year-to-year the numbers of a particular orchid species could be so variable?

I would have liked to have said to Don that this is a straightforward answer, but for reasons you are going to read in the following paragraphs, there can be a lot of factors at play. Thank you to Don for your query, I hope you find the following article helpful.

The meadow at Hawthorn Dene is rich in wild flowers, with some areas having more than 40 species of flowering plant per square meter. The orchids present in the meadow include Northern Marsh orchid (Dactylorhiza purpurella), Common Spotted orchid (Dactylorhiza fuchsii), Fragrant orchid (Gymnadenia conopsea) and Bee orchid (Ophrys apifera), but through the wider site there is also Early Purple orchid and Bird’s-nest orchid (Neottia nidus-avis). 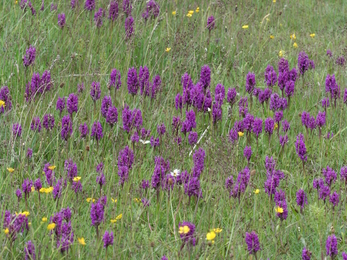 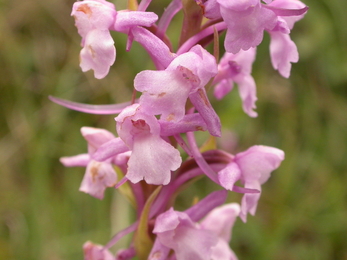 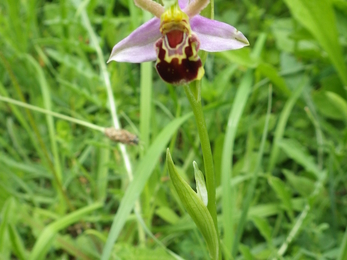 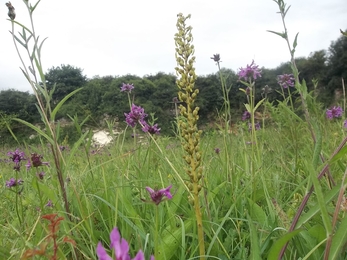 Orchids (the family Orchidaceae) are one of the most diverse groups of plants on the planet. With over 1000 genera and more than 25,000 species they are the largest and most highly evolved family of flowering plants. They can also be highly sensitive to disturbance and nutrient levels so human activities can have a big influence on orchid populations, which can take many, many years to become established.

It is commonly recognised that orchids are plants of soil that has received no disturbance for a number of years. This often is reflected by the fact that we find them occurring on ancient grassland or woodland sites, but it isn’t a hard and fast rule. There are number of sites that Durham Wildlife Trust manages that are not ancient, being former quarries, but it must be remembered that even these more recent sites have been undisturbed for several decades in most cases. That said, two of our more common orchid species, the Common Spotted orchid (Britain’s most common species) and the Northern Marsh orchid have quickly colonised Rainton Meadows since open cast operations ceased in the mid-1990s and continue to give pleasing displays annually. Their quick rate of colonisation in part due to their prolific nature and relatively rapid growth. After as little as two years from germination a plant can begin to flower and continue to do so for several years. It can also remain as a non-flowering rosette for many years if conditions are not suitable for growth, explaining why in some years we can see such amazing displays once conditions become right.

Orchids, as a general rule, produce thousands of very tiny seeds, with the Greater Butterfly orchid producing up to 25,000 seeds per capsule. The sheer number and the fact that this light seed can be carried by the wind, ensures orchids are able to spread their progeny far and wide. Every year the Trust receives calls about Bee orchid appearing where people have never seen it before. Bee orchids appear to be one of the more adventurous of British orchid species, seemingly able to realise new opportunities to establish colonies on areas of bare ground.  They are able to increase rapidly in numbers until a closed sward develops and then, being poor competitors, they disappear. At Hawthorn Dene, Bee orchids are seen annually in permanent grassland, but one where an open sword is maintained by ongoing management and the thin substrate limits plant growth allowing the Bee Orchids to remain competitive.

Whenever we discuss the success of a plant species in any given year, it is impossible to rule out the influence of climate and weather. The Broad-leaved Helleborine is an interesting case in point. Commonest and most widespread of all the Helleborines, the Broad-leaved Helleborine is associated with woodlands, but in truth it can be found in a range of habitats. In a dry summer this species will flower earlier and in fewer numbers, climate quite clearly affecting this species’ local abundance.

An orchid plant may not flower every year. An American study showed that 25%-50% of a Broad-leaved Helleborine population appeared above ground in any one year, and of these plants only around one third flowered. It is thought though, that flowering is more prevalent where the soil is reasonably moist, again reflecting the response to climatic variances.

Pyramidal Orchid is the county flower of the Isle of White, hardly a surprise when you learn this orchid has a deep affinity with lime soils. The plant has basal leaves that appear in late autumn and die down the following summer. This growth strategy can leave this orchid vulnerable to climatic differences with hard cold winters leading to frost damage of the basal leaves that jeopardises a plant’s success in the coming spring. Mild wet winters and hot dry summers are more suitable for this species, which we find in abundance in locations on the Durham coast, where the milder coastal climate perhaps has an effect. Given this year’s winter could we see a bumper bloom of Pyramidal Orchids this year at the Trust’s coastal sites?

There is a strong association between Broad-leaved Helleborines and fungal partners. Some studies show Broad-leaved Helleborines acquire in the region of 60% of their nitrogen and 14% of carbon via fungi in the soil. Around 90% of the world’s plants have a relationship with fungi like this, with the plants’ roots and the fungi growing together in what is called a mutualistic relationship – the plant gets nutrients and the fungi carbohydrates in return.

The Bird’s Nest orchid is a fantastic example of an orchid taking full advantage of this type of relationship. Appearing ghost-like, this species has no green leaves and is completely dependent upon nutrients provided by fungi, with the fungi in turn dependent on the roots of nearby trees. There are few locations in Durham to find this orchid, usually under the gloom of mature beech woodland. Almost without exception the plants are found growing with little other vegetation, erect through the beech leaf litter. Their success can again be dependent on climatic conditions. The fungi prefer warm wet weather, so dry conditions will result in fewer orchids.

We now turn lastly to an orchid that brings Durham Wildlife Trust and its nature reserves national renown. The Dark-red Hellorbrine is found at two of the Trust’s reserves, Bishop Middleham Quarry being the most famous. In the United Kingdom this site is seen as the exemplar, the orchid growing in an abundance not seen elsewhere in the UK.

Volunteers have led an annual count of these orchids at Bishop Middleham Quarry for over 30 years. This has given scholars the opportunity to study this species closely and assess what factors affect its annual success. The highest total of plants ever recorded at Bishop Middleham Quarry was in 1998 with 2195 flowering individuals – 2008 and 2012 came very close seconds with 2158 and 2189 respectively. It is of note that these years correlated with warm wet springs, climate again playing its role.

In Europe this species is almost entirely associated with woodland habitat, a far cry from the UK where Dark Red Helleborine is found in open limestone habitats, such as that at Bishop Middleham Quarry, or the grykes of upland limestone pavements. In Europe a connected relationship between this species, soil fungi and tree roots has been shown and perhaps the lack of trees within the habitats where it is present in the UK may explain why it is usually found in lower numbers than in Europe. This doesn’t however account for the large number at Bishop Middleham Quarry, which remains something of a mystery, but another of the Trust’s sites perhaps follows the European pattern. The Trust have been monitoring Dark Red Helleborine at a reserve near to Bishsop Middleham Quarry for the last ten years. Here the Dark Red Helleborine grows in two distinct habitats: one an old quarry where the population ranges into the 10s, and the other a spoil bank where the population now ranges into the high 100s. The highest populations are found growing along a woodland edge and amongst regenerating birch scrub, potentially reflecting the importance of the relationship between orchid, fungi and tree.

Orchids are hard to describe without getting caught up in their natural beauty. I would encourage people to visit some of the Trust’s reserves in June and July, as Don does at Hawthorn Dene, to appreciate just what a special things these plants are. Your eye shouldn’t stop there though, these plants occur in some very special places maintained by Durham Wildlife Trust with the support of our members and dedicated volunteers. These rare grassland, woodland and wetland habitats supporting a wide range of plant and animal species to be enjoyed.

One last thing. I researched, a number of years ago now, the Lady Slipper orchid as a colleague was investigating a reintroduction programme at the time. I stumbled across an article that described this rare and special orchid occurring in Hawthorn Dene. It was with great sadness that I read that in 1926 the last specimen had been picked and given as a gift to a lady by her admirer – the last record of this stunning plant in Hawthorn Dene. UK law now protects wild plants from being picked in this way, but this story is a stark reminder of the fragility of our natural heritage.
Mark Dinning
Durham Wildlife Trust

Decline in orchid populations in the UK has gone hand in hand with the loss of important habitat across our country’s landscapes. The work of the Wildlife Trust aims to reverse this decline by protecting and restoring habitat on a landscape scale to ensure wildlife can thrive and spread. Your support is vital and enables the Wildlife Trusts to bring nature back.